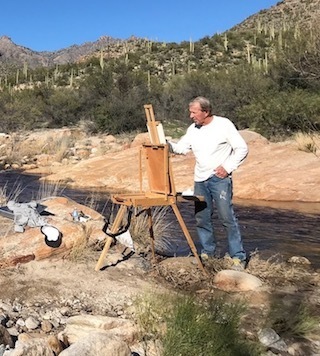 Lou was born in Chicago, Illinois where he attended Saturday classes at The Chicago Art Institute while in elementary school. This was the beginning of Lou's interest in art, later studied oil painting at the University of Illinois. He has had a long career of about thirty years in Chicago as an illustrator working for advertising agencies and studios, ultimately owning a small studio. As an illustrator, Lou worked with and became friends with many illustrators that are currently considered to be some of the best fine artists in the country.

Lou and his wife Lynn divide their year between Tucson and Greer, AZ. Illustration was a wonderful experience and training ground for my current landscape painting. Unencumbered by deadlines as an illustrator, slow drying oil painting offers many freedoms including a third dimension of texture and brushwork.

While I enjoy painting on location for its teaching aspects, I prefer studio painting where less visual scenery forces more imagination and design.